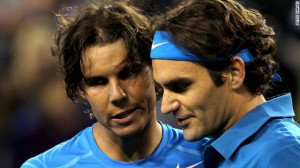 Nadal and Federer have played 4 times at the year end finals. Federer won them all. Nadal has never won the title either so has so much to prove today.He has won all 3 of their 2013 meetings.

Federer’s best surface over the years has always been indoor hard courts. The only times these two have met on an indoor court have been in this event. The most recent was 2 years ago. I’m sure Roger would like to be playing to sort of tennis today that he was capable of then.

All the players this week have shown weaknesses. Nadal’s odd second set against Berdych had the crowd jeering and whistling at him. He was unable to put Wawrinka away when in a strong position in both their sets although Stan should take some credit for not giving up.

Federer has given us glimpses of his best tennis but his game is more fragile than it was in 2011. Nadal’s forehand goes naturally to Federer’s weakening backhand. The slice from Federer is unlikely to trouble Nadal as much as it did the Argentine.

An interesting stat was brought up in the chatroom yesterday and I have seen it on Tennis Insight this morning posted by “paulmurphy”.

Since 2008, the percentage of deciding sets in which Federer would get broken in his first 3 service games of that deciding set are:

He was able to come back from 0-3 in yesterday’s match with Del Potro but Nadal, despite his wobbles this week, has regained his number 1 ranking by playing the big points well and I really doubt that if he finds himself with a lead like Del Potro’s he won’t be allowing Federer back.

Nadal had had an extra day’s rest which only tips things further in his favour. Federer’s love of the indoor courts and Nadal’s distaste for them is likely to give us 3 sets.

Nadal to win in 3 sets seems most likely.

The chance of ending the year as world number 1 was taken away from him. To keep the pressure on Nadal for next season Djokovic would, I am sure, love to beat him in the final here.

Wawrinka hasn’t beaten Djokovic since 2006. Two of their three matches in 2013 were in grand slam events. He pushed Djokovic to 5 sets in each. When they met last week on the Paris courts that are exactly the same as today’s surface Djokovic won comfortably in straight sets.

Stan has performed well in his first visit to the year end finals and the fact that he has played his best tennis against Djokovic in big matches should mean we will have another great match from these two.

As long as Djokovic doesn’t have more problems with his eyes or his limbs taking on a life and will of their own (what the f**k was that about anyway??) then Djokovic takes this at a canter. I don’t expect Wawrinka to cave in though and if Djokovic takes the first set and then tries to save energy for the final it may open a window of opportunity for the Swiss player.

Djokovic to win in 2 tight sets or perhaps 3. A tie break wouldn’t be a surprise.