Get the Daily Trading spreadsheet emailed to you every day (including weekends). Previews and trading advice for all the main tour matches.

Ferrer leads the head to heads 6-2. Their most recent meeting was in the  2015 Australian Open, Ferrer won in 4 sets. Simon won at the 2014 US Open  in 4 sets. Those were their only outdoor hard court meetings. 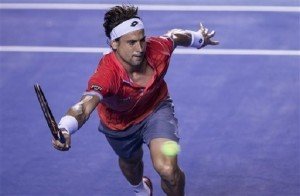 The season’s stats favour Ferrer. He has lost just 2 matches this year ( to Tomic and Nishikori). the slightly slower courts should help him even more with his defensive skills.

Simon has lost just 1 of his last 10 ATP matches ( to Nadal). Simon has served well so far and has a great chance of taking a set. I have to go with Ferrer for the win though. He has been super consistent this year. It should  be a decent match with plenty of long rallies as each likes to wait for their opponent to make errors.

Wait for an early Simon break before backing Ferrer. Ferrer starts around 1.41

Nishikori is firmly established as a top 10 player. He has had an excellent season so far.

Goffin has made a slow start to 2015 which wasn’t helped by injury but he seems fit now and is playing at the sort of level we came to expect from him last year. I thought he would struggle a little more than he did against Janowicz in the last round but he controlled the match and won in straight sets. His second serve could have been better but Janowicz’ was even worse. Goffin saved 3 of the 5 break points he faced.

Nishikori hasn’t dropped more than 2 games in a set so far. He was helped in the last round by Troicki not being 100% fit but he played a very strong, professional match.

Goffin should give him more of a test and I think we will see Nishikori trade higher. I will lay Nishikori below 1.20 for a trade but I expect him to be too strong for Goffin.

The season stats favour Venus. She also has a better Win/Loss record. They are very closely matched and even though Venus is in her home town, because they are so hard to separate the value is on Suarez Navarro.

Suarez Navarro fought back well against  Radwanska in the last round and won the second set  6-0. She had a double break lead in the 3rd set and was broken the first time she served for the match but at the second attempt she held to 15.

Venus hasn’t dropped a set yet but needed a tiebreak in the second set in the last 2 rounds. Against Stosur she threw away a 5-2 lead in set 2 and against Wozniacki she broke Woz twice when the Dane served for the set before playing a superb tiebreak.

I have to favour Venus for the win but I think we see 3 sets. Back Venus when she is a break behind. She starts around 1.68 .