All today’s main draw matches are on the Trading Advice Email. Previews and trading advice for every match. 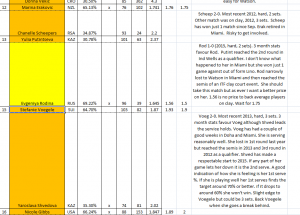 Brown won just 2 of last 10 matches. Since the Australian Open 5 of his 7 losses were in 3 sets. In his 2 straight sets losses 3 of the 4 sets were tie breaks.

This is a tough one to call but I think Brown has an excellent chance. Value is on Brown.

Voegele leads the head to heads  2-0. The most recent meeting was in 2013 on a hard court and she won in 3 sets. The 3 month stats favour Voegele although Shvedova leads the service holds.

Voegele has had a couple of good weeks in Doha and Miami. She is serving reasonably well. She lost in the first round last year but reached the semis in 2013 and the third round in 2012 as a qualifier.

Shvedova has made a respectable start to 2015. If any part of her game lets her down it is the 2nd serve. A good indication of how she is feeling is her first serve percentage. If she is playing well her first serves find the target around 70% or better. If it drops to around 60% she won’t win.

I give a slight edge to Voegele but we could see 3 sets.

Back Voegele when she goes a break behind.

Riske has lost all 6 of her previous matches at Charleston. She was underdog each time. The courts really should suit Riske’s game. She did reach the semi finals in Hobart and has had some tough draws since. She is a better player than Bondarenko but hasn’t shown her class recently.

Bondarenko has a slight edge having played the qualifying rounds but I have a feeling Riske gets it together today and wins in 3.