Yet another trading video added to the members area last night. That makes 5 in 2 weeks!

Lifetime membership of TradeShark Tennis with unlimited support. The Trading email is for 1 calendar month. The bundle offer is a one time payment. NO subscription.

Get the BUNDLE offer here

Head to heads are 2-2. Their only recent match was last season on clay. Almagro won in 2 sets.

Mathieu has been in great form on the clay recently but he looks to be getting tired. He has ridden his luck this week. He came so close to choking away the second set against Klizan. He served fairly well in the 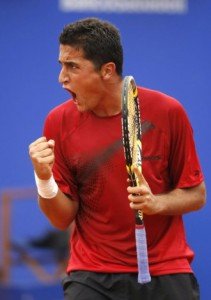 opening set with Delbonis but only won 3 points on serve in set 2. In fact those 3 points were in the first game and he was broken from 40-0. It looked like he was going home but Delbonis had a shocking third set.

Almagro has been far from his best but this week he got exactly what he needed. Some wins. They will help his confidence. He needs the ranking points a lot more than Mathieu does.

Back Almagro if he gets broken first.

Stosur has won all 5 of their previous matches.  The most recent  was in this year’s Australian Open. She won in straight sets. All their matches were on hard courts.

Stosur has played and served at a high level this week. If that continues I don’t give Niculescu too much of a chance. However if the Stosur serve is a little off then Niculescu is playing well enough to take advantage. She was having a very average season until she played an ITF in France on clay. She won the title. A week later she reached the final of a WTA tournament on grass in Nottingham. A fourth round at Wimbledon and semi final in Bucharest were all unexpected.

Back Stosur when a break behind.

One for you night owls!

Sock leads their previous meetings  3-2. On hard courts Sock leads 2-1. Johnson’s win was indoors. Their most recent meeting was lat season at the French Open. Sock won in straight sets.

Sock beat Gasquet in 3 sets in the last round. He served very well and saved 5 of the 6 break points he faced. He didn’t have a single break point against him in his first match.

Johnson beat a mentally challenged Tomic in his 2nd match of the week having beaten Lacko in straights in round 1. He  then took out Dimitrov. He only faced 3 break points and was broken twice. He put the Dimitrov serve under a lot of pressure forcing 8 break chances and breaking twice.

There’s not much in this. I have to give Johnson a slight edge and value is on him as underdog. Backing serves is a good option and the price is ideal for that.

Lay the 1st set winner as I think this is going to 3.