Murray leads their previous matches 8-6.  He won their last 4 matches which were all in the last 2 seasons. They have never played on grass.

They have met twice in grand slams. In January 2015 at the Australian Open Berdych took the opening set before Murray won in 4 sets. At the US Open in 2012 it was a similar story with Berdych taking set 1 but losing in 4 sets.

Berdych hasn’t had a bad draw. Three of the 4 sets against Dodig were very tight in the 1st round.  Becker didn’t give him much trouble in the 2nd round. I had expected Zverev to be a little more competitive than he was but he managed to win just the 3rd set.  I had not expected Vesely to take Berdych to 5 sets in the 4th round.  Berdych was broken just 3 times in that match. He only served 6 aces in 5 sets.  Pouille’s excellent tournament came to an end in the quarter final and Berdych came through in straight sets. He was broken once. 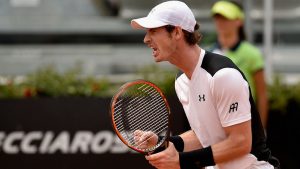 Murray has also had a pretty decent draw. He cruised through to the quarter finals without dropping a set.  He was broken 3 times in 4 matches. Kyrgios didn’t even get a single break point.  He took a 2 set lead over Tsonga in their quarter final but the Frenchman took sets 3 and 4. Murray ran away with the 5th set 6-1.

A quarter final is not the time you want a 5 set match. Murray has the better game for grass and will have virtually the whole crowd behind him. He needs to gauge his level of effort to win the match without expending unnecessary energy. That is likely to allow Berdych to take a set.  His best chance is the 3rd set if Murray is 2-0 up though of course he has taken the opening set in both their previous grand slam matches.

No value on Murray at the start and a lay could be a good option.