Federer leads their previous matches 9-2.  Their last match was in January. Raonic won in straight sets on a hard court in Brisbane.

Raonic got through his first 3 rounds without dropping a set but needed a tie break in each opening set. In his 4th round meeting with Goffin he was surprised by Goffin’s returns in the opening 2 sets and lost both of them. He made the adjustment to take the next 3 sets by a score of 6-4. His quarter final opponent was Querrey who of course beat Djokovic and had backed that up with a straight sets win over in form Mahut. Raonic won that in 4 sets and only faced 2 break points. He won 87% of points on his 1st serve and 71% on his 2nd serve. 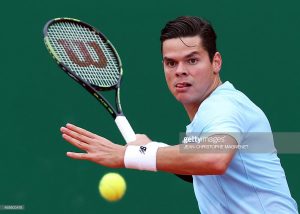 Federer had a tricky 1st round match with Pella. He needed tie breaks in the first 2 sets. His next 3 rounds were very straight forward with Willis, Evans and even Johnson unable to put him under much pressure.  In the quarter final he came up against an inspired Marin Cilic. Cilic brought the sort of form that saw him win the US Open in 2014. He was giving very little away on serve and was taking advantage of the fact that Federer was having some trouble on serve.  Cilic took a 2 set lead before he started to think about winning. He started making a few more errors. Federer started to play better tennis and took encouragement from the fact that Cilic’s level had dropped. Once Federer had levelled at 2 sets all a combination of experience and reputation was enough to secure the win.

Federer’s price has settled just above 1.60 . That looks a good price given his record at Wimbledon. This is the first time he has played a 5 set match at the quarter final stage. He has had a limited number of 5 set matches at Wimbledon. In matches other than finals he always played a much lower ranked player in the next round and was able to get through.  As he is not at his very best right now we have to consider what physical effects he will feel from the Cilic match.

McEnroe’s advice will have been flowing thick and fast. Raonic needs to get off to a quick start but its hard to see him taking set 1 any other way than in a tie break.

This could be an entertaining match and I am going with Raonic for the upset.  Federer is untested at Wimbledon when taking on a top player after a 5 set match. Lay Fed if he gets an early break or takes set 1.