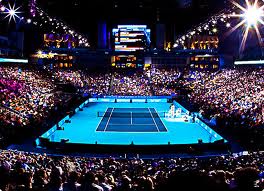 Djokovic is the defending champion and has won for the last two years. He didn’t lose a match in those two tournaments.

The Finals this year have a different feel to them. Cilic, Raonic and Nishikori are all making their first appearance.

Djokovic heads Group A for the Round Robin matches. There are no easy matches when they involve the games top players but he will be happy enough with his draw. He has a strong record over the other players in the group. He leads Wawrinka 14-3, Cilic 10-0 and Berdych 16-2.

Djokovic ended the regular season strongly by retaining his Paris Masters title. He seems as close to a certainty as you can get in tennis to reach the semi finals.

Who will take the other semi final place? Cilic has losing records against Berdych and Wawrinka and may suffer a little more with the nerves as it’s his first visit to the Finals. He may also feel extra pressure as he won the most recent Grand Slam. I don’t expect him to repeat his US Open form.

So it will probably come down down to Berdych and Wawrinka to decide the semi final spot. Wawrinka leads their head to heads 9-5 and has won their last 4 meetings but none of them were straight sets. Based on the player’s more recent , form I would have to give the edge to Berdych to go through.

Roger Federer stands at the top of Group B. he will face Murray, Raonic and Nishikori.

Federer did have a 6-0 record over Raonic but the big Canadian beat him last week in Paris. Fed is 11-11 with Murray although he has won both his 2014 matches with the Brit. His record against Nishikori is 2-2 and they are 1-1 in 2014 with Nishikori’s win coming on a hard court.

Federer’s place in the semi finals is nowhere hear as certain as Djokovic’s. He should have the edge over new boys Raonic and Nishikori as they are likely to suffer with nerves. Federer knows what it is like to win this tournament and whilst I would expect both players to put him under pressure his greater experience must make him favourite to reach the semis.

Murray has ended the season very strongly and to finish at 6th in the rankings was a superb effort.  He is 3-0 against Nishikori and trails Raonic 2-4. He also has the advantage of experience over both guys but Raonic in particular could give him some real problems.

This group is really wide open. I have to go with Federer for the semi finals but feel if Raonic can deal with the nerves he could be the surprise semi finalist. Nishikori may have something to say about that and in fact leads his matches with Raonic 4-1 but I think the Canadian has peaked at just the right time.

I will be previewing each singles match throughout the tournament.