What a day yesterday! Wozniacki lost in straight sets to Goerges. I thought she would do well this year. Schiavone knocked out Kuznetsova who also looked set for another  good tournament at Roland Garros.

Pliskova isn’t at her best on clay but Mitu wasn’t expected to beat her. Serena Williams looked very shaky in her match with Friedsam who really hasn’t had a good season. Friedsam took the opening set.

Ivanovic’s inconsistency has continued to some degree this week. 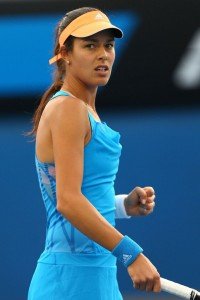 She has lost the opening set in both her matches. She has stepped up well both times but her approach at the start of matches needs sorting if she is to make an impact in this tournament.

Vekic beat Garcia in the first round in 3 sets to spare Ivanovic being beaten by her for a 4th time this season. Jovanovski has been in excellent recent form but Vekic beat her in 2 sets. This is the first time that Vekic has made it past the first round at Roland Garros.

Ivanovic is a huge step up in standard of opponent for Vekic, or at least in reputation of opponent. Back Ivanovic if Vekic breaks and holds in the early games.

Lisicki  leads the head to heads 3-1. Safarova won their only clay meeting which was at the French Open in 2009.

Safarova’s serve wasn’t at its best in the first round against  Pavlyuchenkova. She hit 9 double faults. She was far too strong for Nara in round 2.

Lisicki has a reputation for being poor on clay and for a top 20 player it isn’t great that she rarely wins 2 matches at clay events. She reached this stage in 2013 but that’s her only other visit to the 3rd round.

I have to favour Safarova for the win but Saf looks too low as I think this could be very tight. Back Safarova if Lisicki takes a break lead.

Pennetta leads the head to heads 4-2. She won their most recent match in 2014 on an indoor hard court. They are 1-1 on clay.

Suarez Navarro has been in excellent form this season. She has reached the quarter final or better in every tournament except the Australian Open this year.