Muguruza leads the head to heads 2-0. Their last meeting was in October on a hard court. She won in 3 sets. 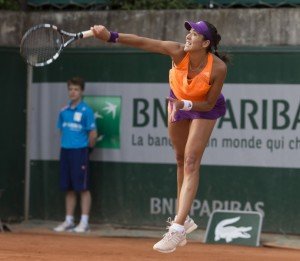 Muguruza came through the last round courtesy of a meltdown from Kerber. The German was a break up in the third set but was then unable to hold serve. Both players hit more unforced errors than winners.

Pennetta had a surprisingly easy win over Suarez Navarro. Carla had a nightmare from the line winning just 18% of points on her second serve.

This should be another match with a few price swings. Muguruza needs another win to defend her quarter final points from last year. Pennetta is capable of playing a great match at any time and her experience would help her if she was able to keep this close.

We could easily see 3 sets. Back Muguruza when a break behind.

Their match resumes this morning after rain delays didn’t leave enough time for the full match.

Monfils started very sluggishly. he looked liked the fatigued player that many, myself included, had expected although I didn’t expect him to struggle so early. He didn’t really look interested and the 6-3 scoreline flattered him. Early in the second set it was a

different story. He got the early break and held onto it for a while but as they moved towards the almost certain suspension of play Federer broke back. It looked like Monfils’ chance has gone but it was Federer who was caught napping. Monfils broke for the set.

The players were offered the choice of continuing or resuming on Monday and both agreed it was a good score to finish the day on.

Monfils had the momentum but I am sure he would love to rest up to make a serious bid for the quarter finals today. Federer didn’t look comfortable for much of that second set and I wasn’t surprised he wanted to go off.

It looks like being  another great match between them. Things have tipped slightly away from Federer as Monfils will be in better shape after a night’s sleep. The opening games of set 3 will be vital and I expect Federer to throw everything at him in the early games.

Before the match I thought Federer wins in 4 sets. Now I think we go to 5.

Williams leads 4-1. Their last meeting was in Madrid on clay earlier this season. Williams won in 2 sets.

Williams was a set and a break down to Azarenka in the last round before fighting back. She won the last 6 games of the match after going a break behind in the third set.. That was just the sort of match she needed to take her into the second week.

Stephens has defended her points from last year and has played some good tennis but I think she would have preferred to play Williams 1 round earlier as Serena hadn’t looked sharp up to that point.

Williams has lost the opening set in her last 2 matches so it isn’t out of the question for Stephens to take a set. Straight sets looks more likely but I will wait to back Williams if she loses the opening set.