Kerber has won 5 of their 6 meetings.  5-1. Strycova’s win was on clay in May 2016. That is the only match she won a set in. They played on a hard court in August and Kerber won in 2 close sets.

Kerber was fairly solid in her first match this week. She was broken a couple of times by Siniakova but won in 2 close sets. 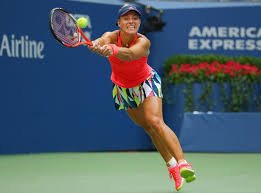 Strycova had a very tight match with Siegemund in the last round. She lost the opening set 5-7 but bounced back to take set 2 by the same score. In the third set it was again tight and yet another 7-5 set went Strycova’s way.  It was a scrappy match with both players coming under a lot of pressure on their serve. Strycova was broken 7 times from 14 break points and Siegmund faced the same number of break chances but was broken 8 times.

Strycova’s only chance is if Kerber is tired but the German reached the quarter finals last year and I’m sure doesn’t want to let too many ranking points get away from her now she is number 1.

No value at 1.21. It could be worth a small lay at the start and switch to Kerber if she gets broken.