They have met twice before. Their most recent match was in Hong Kong last October.  Cornet won in 3 sets on a hard court. I April 2013 they played a Fed Cup tie in France and it was Shvedova who won in 3 sets, this time on an indoor hard court. 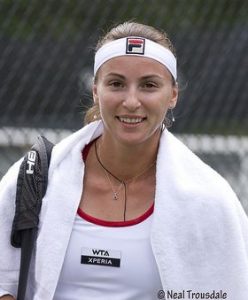 Excellent win for Cornet over Cibulkova in the last round. It was a scrappy match with 17 breaks of serve.

Shvedova only needed 2 sets to beat Bencic and Suarez Navarro. I have to favour Shvedova as she should be the more solid on serve. Wait for 1.90 before entering. We have a good chance of 3 sets. Shvedova starts around 1.75.