Williams leads their previous meetings 5-2. The last time they met was in the Australian Open final in January. Kerber won in 3 sets. All their matches prior to that were won in 2 sets. 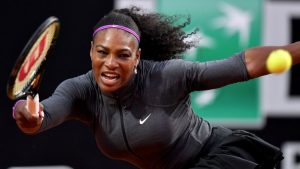 not at all worried about fitness. She had just one small blip in the second round losing the opening set to McHale in a tie break. Since then 3 of her 4 matches have included a bagel set. 6-0 sets against in form Vesnina and Kuznetsova were real statements.

Kerber has done a great job so far though her serve needs to be a little better placed.  She has not dropped a set so far although Witthoeft taking her to a tie break was interesting after Kerber’s 6-0, 6-0 defeat of her in last year’s tournament. Her closest match was against Halep

who was able to put  her serve under a great deal of pressure so you can guarantee that Williams will too.

Williams has lost her 2 slam finals this year. I just can’t see her losing this one. She has had plenty of time to get her head around taking her 22nd slam. Kerber may take it to 3 sets but I have a feeling her serve is going to get creamed on several occasions unless she really improves from the line.

Back Williams if she is broken first.