Cibulkova won their only previous meeting. That was in the Kuala Lumpur semi final in April 2014. She won in 3 sets on a hard court. She was a fairly strong favourite for that match as Pliskova was ranked 75th and Cibulkova was 10th. Two years later and things are a little different now with Pliskova being the higher 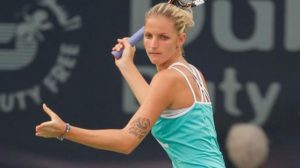 Cibulkova has had a strong week dropping just 1 set. That was to Radwanska in the quarter final. She dealt with the difficult conditions better than Radwanska and won in 3 sets. She beat Puig in straight sets in the semis in a match that I gave Puig a chance of winning.

Pliskova has also looked good this week and dropped her only set in the semi final. Konta took the opening set in their semi final. Pliskova’s serve can be the difference between them today. She will get more cheap points than Cibulkova will get on hers and the Slovak will have to work a lot harder for her holds.

I can see this going to 3 sets. I favour Pliskova for the title. Back her if she is broken first or loses set 1.