Muller leads their previous meetings 3-2. Their last match was in August  2016 at the Rio Olympics. Muller won that one on a hard court in straight sets.

Tsonga wasn’t impressive in the last round. He probably underestimated his inexperienced opponent. He won it in straight sets but it wasn’t as easy as it should 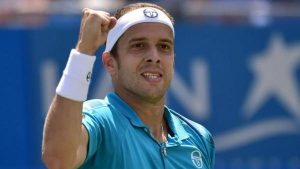 have been. He was broken when serving for the match and needed a tie break to close out the set.

Muller has had a good start to 2017. He won the title in Sydney in January. He also reached the quarter finals in Sofia last week.

We have 2 big servers so the sets will be tight. We will get at least 1 tie break. The initial value is on Muller. Try to lay Tsonga around 1.30 in the early games