The Trading Advice email has been sent out. I had myself geared up for 64 matches but as they start a day early they have been kind. Just 32 matches today!

Sign up for the daily emails with predictions, previews and trading advice on all the day’s matches HERE

Davis leads the head to heads 3-0. Their most recent match was in 2014 on clay and she won in 3 sets. They have played twice on clay. 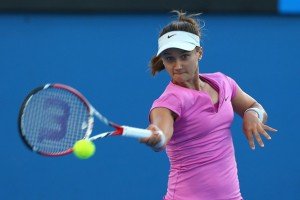 Lucic Baroni has been in poor recent form this year. Her confidence wont have been helped by her last match. She was a set and 5-0 up over Keys and lost.

Davis has been very inconsistent. She reached the quarter finals in Charleston where she beat Bouchard That has been  her only really successful week. She lost her lost her last match to Schiavone in straight sets.

Expect a lot of breaks in this match. The outcome really depends on how Lucic Baroni handles the disappointment of her Keys loss. After all she was playing well enough to get to a set and 5-0 up.

Lay whoever gets the first break. Neither player is good at keeping a break lead. The head to heads suggests a Davis win but its a tough one to call the outright winner.

Maria reached the final of an ITF clay event 3 weeks ago. It was a decent strength field. Her form this year has been reasonable without being spectacular. Her best week was actually on hard courts in Miami where she beat Vinci and Bouchard.

Giorgi reached the final in Katowice in April but has lost her 4 matches since then. She loves a big stage but often needs a big name to really inspire her.

I can see this one going to 3 sets unless all Giorgi’s big ground strokes hit the lines. She hasn’t found too many lines recently.

Back Giorgi when a break behind. She starts around 1.63 .

Gulbis reached the semi finals last year. THAT won’t be happening in 2015. He still has

just 2 wins this season. He beat Dolgopolov in 3 sets last week but was very ordinary against Thiem.

Sijsling is also having a poor season but came though the qualifying rounds beating Zverev and Copil as underdog.

Lay Gulbis but not at the start. Wait for him to drop near 1.20. Gulbis will probably come through but it won’t be in straight sets.