Safarova leads the head to heads 5-3. She has won 5 of their last 6 meetings. Ivanovic won their last match on a hard court last season. Safarova won at last year’s French Open in 2 sets. 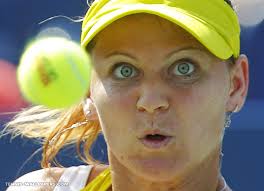 Both have been strong on serve although the quality of Safarova’s opponents has been much higher. Muguruza and Sharapova were beaten in straight sets. Safarova has not dropped a set so far. Ivanovic dropped 3.

Both players have strong forehands and with Safarova being left handed the natural cross court forehands goes to the opponent’s weaker side. There were signs in the last match that Ivanovic was trying to avoid using her back hand in long rallies and was going for drop shots a little too often to shorten the rallies when Svitolina was playing to that side of the court. Safarova’s backhand is better than Ivanovic’s but Ana also like to hit forehands to a right hander’s backhand. She seems more comfortable going “inside out” which takes it to Safarova’s stronger side.

I give a slight edge to Safarova but will wait for a price nearer 2.00 before backing.

Williams has won both their previous meetings. Bacsinszky has kept the opening set of both matches close (7-6 and 7-5).

As expected Serena was too strong for Errani in the quarter final. It was a little like the teacher playing one of her pupils.

Bacsinszky took an early lead over Van Uytvanck. She was 3-0 up with a double break but wasn’t able to hold serve for 4-0. Her serve improved after that and she was able to hold onto the single break lead. In the second set she again took an early break lead but was pulled back. She won the set and the match. with a late break and hold from 5-5. Van Uytvanck handled the occasion better than expected but Bacsinszky let her off the hook several times.

I think Williams will try to cruise through this without expending too much energy. She knows she can win this and if she gets into trouble she can step up a gear.

Back Williams if she goes a break behind.