Nothing to do with trading!

A few days ago my car broke down. I had been to pick my wife up from work and on the way home she wanted to call in at the shop. I parked up and she went inside. About 5 minutes later she came back and I turned the key to start the engine. The starter turned over but the engine wouldn’t start. The car’s not a new one but it’s very reliable. I tried a couple more times but with the same result. As you do in these situations I tried to find an explanation but drew a blank other than maybe it was something to do with the heavy rain. I didn’t really think that was it but I had nothing else. We only live a couple of streets away from the shop so we took the shopping, put the spare lead on the dog who always comes with us in the car an 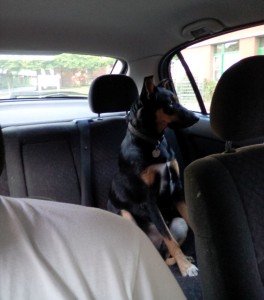 A couple of hours later myself and the dog walked back to the car. Charlie jumped in the back seat and took his normal place by the window. I got in the front, turned the key and the car started up as normal. I had no idea what the problem had been but was relieved and told myself it was just a one off.

Only it wasn’t a one off.

The next day I dropped my wife off at work in the morning and that night went back to pick her up. I was a few minutes early and so parked up. At 7:30 Sue came out and got in the car. I turned the key with the same result as last time. The starter motor turned over but the engine didn’t start.  Over the next few minutes I tried it again maybe 3 or 4 times. On the last try the battery died. Oh great.

OK, not a major problem as I have breakdown cover. I took my mobile from my pocket. THAT battery was dead! What’s going on?? Is it fuckin’ aliens??  Sue sheepishly told me her mobile was also flat. Charlie could tell I was stressed. He sensed it. He was trying to hide under the passenger seat.

There was enough juice left in mine for me to get the number for the Direct Line recovery service so I set off for the main hospital building (Sue works for the NHS at Worcester hospital). I could only find one public phone and there was a queue. Fuck it we’ll walk home. It is only a 20 minute walk, well, 30 at Sue’s pace.

So we walked. At home I called the breakdown service who arranged to send someone out. After a coffee I walked back down to the hospital to meet the recovery guy. When he arrived it was after 9pm. I explained to him what had happened and he asked me to turn the key. The car started first time. You’re fuckin kidding me!

It happened a couple more times over the next 2 days. I am no car expert and especially not about what goes on under the bonnet. I wasn’t about to let a garage “try” a few things before finding the real reason so a lot of internet research later I worked out it was due to the coolant temperature sensor failing. When the engine is warm the car thinks it is cold and the fuel it sends through is too rich which causes it  not to start. So I ordered a new sensor which is due to deliver Thursday.

So today I didn’t need to go anywhere. Sue was off work but needed to go into town to collect a prescription. She said she would go on the bus but I told her if I got a gap between matches I would run her down there.  Just after 12 I had time to make the 20 minute round trip. I parked outside the pharmacy and left the engine running. Sue was back out within 5 minutes and we set off home. Traffic was horrendous even for a lunchtime. I pulled up at a roundabout where I needed to turn right. The car was fine as long as I didn’t stall it. As the engine was now warm the car wouldn’t be able to be started.  I hadn’t really thought about this as i hadn’t stalled a car for 10 years or more. But I thought about it as I waited at the roundabout. Don’t stall it. Don’t stall it. Don’t stall it.

I saw the dashboard lights come on and panic set in. I tried to restart it but of course knew it wouldn’t start. I was at the front of the queue waiting to enter the roundabout. In the right hand lane. And my car won’t start until the engine cools enough which takes about an hour and a half. Fuck. FUCK!!!

Charlie sensed I was stressed. He was trying to get out through the 2 inch gap in the window.

I needed help. Charlie was too busy to help. He was trying to crawl up his own arse so he can’t hear Dad shouting. Sue is sat in the passenger seat telling me to calm down. OK if she can steer the car I can push it back up the road and out of immediate danger. I let Sue in on the plan. She went white. She isn’t a driver and never will be. Her only experience behind the wheel of a car came many years ago during a lesson from her sister. She managed to drive the car into a field, across the field and into a hedge. What was i thinking? So I needed outside help. I saw a couple walking towards us and called them over. i asked the guy if he would steer the car while I pushed it. His wife wouldn’t let him! She said THEY would push while I steered. Really? Are you sure? They were. I must have looked even more like a twat as I was getting 2 women and an old guy ( Sue helped them)  to push my car while I sat on my arse steering! They couldn’t push it back as the traffic just never stopped coming but they pushed me forwards and I steered onto the pavement. Still not ideal but definitely better than being in the middle of the road.

There seemed no point calling the recovery people as the car would start once it cooled. So we sat and waited. After a few minutes I looked in my mirror to see a traffic warden walking towards the car.  Oh fantastic this is all I need.

I have to say the traffic warden WAS fantastic! He asked if the breakdown service was on its way and I explained the situation. He said he couldn’t leave us where we were as it wasn’t safe and as the traffic had eased he said he would push us back down the road and I was able to steer half on the pavement well away from the roundabout. It is a very narrow road and because of the parked cars on the other side  we couldn’t park fully on the road without blocking it.

I wasn’t sure how long the engine would take to cool enough. i tried after 30 minutes, 60 minutes, 90 minutes. No joy but with each attempt the battery was getting weaker. After almost 2 hours I knew I had one more try left in the battery. I turned the key and the battery died. At least  this time my phone was charged. I called the breakdown service who got to us in just under an hour. I told the guy what had happened and when we had had a laugh about it he got us started. Just in time for rush hour.

That 20 minute round trip ended up taking us 3 hours. When I got home I traded a bit of WTA to relax!