Their head to heads are 7-7. Sharapova has won their last 3.

Azarenka has been frustrating me this week. The only match I thought she would struggle in was the only one she won in 2 sets. She played at a crazily high level for much of her match with Wozniacki. Was that because she saw Wozniacki as a threat and was more focused from the first ball? Possibly. If that is the case she will be in the same frame of mind coming into this one. 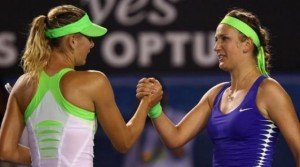 Sharapova has come through both her match in 2 sets but whilst she didn’t face a break point in her first match she was broken 3 times by Jovanovski.

This is hard to read pre match. If Azarenka can play as she did against  Wozniacki then she can win this. Wozniacki served badly that day though.

Three sets look likely and we will see Sharapova trade above 2.00 . I’ll be laying whoever gets the first break.

If pushed to pick a winner I am going with Azarenka. One thing is for certain. I will be muting the sound.

Nadal leads their head to heads 12-1. Wawrinka won their most recent match which was in the Australian Open final last year. Nadal was injured that day! They have played 5 times on clay and Wawrinka hasn’t won a set.

Wawrinka served well against Thiem in the last round and saved the single break point he faced. He was only able to take 1 of the 2 break chances he had on the Thiem serve.

Nadal didn’t face a break point against Isner and was able to get a single break in each set on the Isner serve.

Wawrinka has shown in the past that he can lift his game at any time but I doubt his ability to do that at the moment. Of course Nadal isn’t quite at his best either so the sets should be close.

Nadal is too low and is worth a lay below 1.15 . You’d expect Nadal to come through a tight match.