Dr Matt Abraham who incidentally, allegedly, has a PhD in Probability and Statistics has decided to remove the tennis section from his product. Not certain why but I suspect he thought that statistically the probability of me leaving him alone was small.

He has changed his sales site and also emailed his customers to explain that he is going to concentrate on what he does best.

“Slight change to the order of running here at BTE.  As you know I’ve recently made a few amendments to allow me to refocus on what I do best, which is trading.
Well as part of that process BTE will now be fully focused on football trading and that means that tennis will no longer be part of the service, although you probably won’t be too upset as I’ve not sent a tennis tip out this year :-)”
Ahh nothing to do with being shown to be a lowlife scumbag. 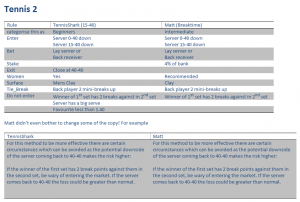 The above screenshot is just part of a comparison done by the CashMaster Blog.
No word from the Doc himself to me despite sending him greetings via various media although I did get a juvenile comment on the blog from a matt@hotmail.co.uk .
I wonder what the probability is of him sending me a share of the money he got by selling a product where 4 of the 6 strategies were copied and pasted from my site…….